The northwest English city is the first to be placed at "very high risk" under a new three-tiered system.

Data leaks, including the FinCEN files and the Panama Papers, show that the Caribbean archipelago was a major global hub for money laundering and tax evasion.

Among the stash are signed photos and letters relating to JFK, Elvis Presley, Winston Churchill and even Gandhi.

In combatting the renewed outbreak, Johnson has been accused by some of his own lawmakers of governing by diktat.

One of the first direct consequences of Brexit, the move by UK lenders to shut expat services is said to affect tens of thousands of people across Europe.

Commentators argue that a combination of taxation, inflation, spending cuts, and even economic growth could help balance the books for Sunak.

UK transgender patients turn to crowdfunding due to huge delays

Transitioning for transgender patients could take years on NHS, so they are turning to online fundraising for surgery.

Despite expressions of disquiet even from some members of the ruling Conservatives, the House of Commons passed the bill by 340 votes to 256.

Boris Johnson also called a halt to the planned phased return of fans to live sporting events in England from October 1.

UK steps up coronavirus threat level after rise in cases

Shut UK nightclubs worry about not seeing light of day

Six months after Covid-19, London's dance venues like Printworks and similar ones across Britain are closed, and there is no knowing when they will reopen. 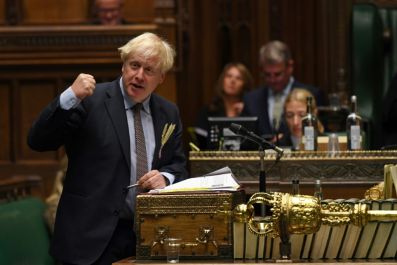 UK rejects EU call to back down over Brexit Bill