Stepfather jailed for secretly filming stepdaughter in the bath since she was 14.

The covert recordings only came to light after his stepdaughter spotted his phone above the bathroom door on the eve of her 18th birthday.

The woman was sentenced to 5 months in jail for fabricating a story saying she had only two months to live.

Mowbray had entered boys' rooms on the pretext of discussing schoolwork but then would end up touching them for sexual gratification.

Any trade deal reached by Barnier and Frost will have to be approved by the EU and UK parliaments, and special sessions may have to be held in the final days of this year.

Prosecutors pointed out that it was not an instant death for her daughter as it had taken "in the region of one hour for her to die."

In London, the government insists that Britain is ready to leave the union and handle its own affairs after 47 years of close economic integration.

Transport companies have also warned that EU member Ireland could see import volumes shrink in the event of new customs procedures for goods routed through Britain.

£114.9 million lottery winners reveal they have given away half the jackpot prize to help people in need.

Because the couple had been so generous, a scrapbook filled with 300 thank you cards can be found in their home from people whose lives the couple helped change despite never having met them

Johnson heads to Brussels as time runs out for Brexit deal

The EU fears Britain slashing its regulations, which could allow its companies to undercut European firms.

Last-ditch effort to save Brexit trade talks from failure

Johnson has insisted Britain will "prosper mightily" whatever the outcome of the talks, but he will face severe political and economic fallout if he cannot seal a deal. 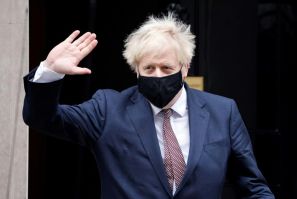