Streaming giant Amazon has secured live rights to the Champions League in the UK for the first time from 2024.

Barcelona are ready to make a fresh offer for Leeds United forward Raphinha and sign him ahead of Chelsea and Arsenal.

Arsenal are facing the prospect of losing out on both Raphinha and Lisandro Martinez after Chelsea and Manchester United emerged as the frontrunners.

Lewandowski might go on strike against Bayern to force exit

Mikel Arteta is keen to get most of his transfer business done before his team departs on their pre-season tour on July 8.

Are Arsenal being played? Fifth signing slipping away

Arsenal and Chelsea have been the frontrunners in the chase for Raphinha but Barcelona have reentered the race with fresh talks with his agent.

Tottenham Hotspur have beaten Arsenal and Chelsea to the signing of Richarlison. Spurs have agreed personal terms with the Brazilian forward.

Manchester United are expected to complete the signing of Tyrell Malacia in the coming days after Feyenoord accepted the Red Devils' bid for the full back.

Chelsea have moved ahead of Arsenal in the race to sign Leeds United forward Raphinha this summer.

Messi mocked by Suarez for getting sleepy 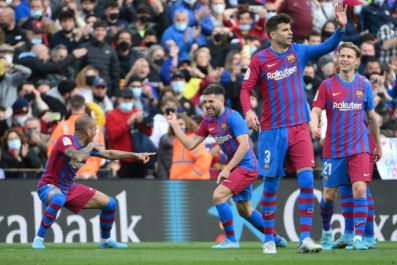