British consumer price inflation jumped to 10.1% in July, its highest since February 1982, up from an annual rate of 9.4% in June, intensifying the squeeze on households, official figures showed on Wednesday.

Coca-Cola and McDonald's left Russia. Their brands stayed behind

Western companies with iconic brands like Coca-Cola that exit Russia face years of battling knockoffs and unauthorized imports clamoring to fill the void they leave behind, a risky bid as courts show little sympathy for firms that depart.

German utility Uniper reported a net loss of 12.3 billion euros ($12.5 billion) for the first half and warned it would take until 2024 before it could return to profit.

This offer is limited to one payment per customer and the money will be credited within 28 days.
MORE NEWS

With the recently launched Developing Countries Trading Scheme (DCTS), the UK will extend tariff cuts to hundreds of more products from 65 developing countries.

Britain recorded its biggest rise in foreign workers since the start of the COVID-19 pandemic in the year to June, driven overwhelmingly by workers from outside the European Union, official figures showed on Tuesday.

The two candidates battling to be Britain's next prime minister vied to present themselves as defenders of Scotland's place in the United Kingdom on Tuesday, promising more scrutiny of Scotland's government to undermine a new push for independence.

BHP Group Ltd reported bumper profits on Tuesday on the back of gains in prices of coal and other commodities, and declined to rule out a second approach in its spurned $6 billion bid for OZ Minerals.

U.S. inflation at a four-decade high has hit lower-income Americans the hardest. On Tuesday, Walmart's results showed that those with bigger wallets are getting squeezed, too.

Amazon.com Inc confirmed that the Federal Trade Commission (FTC) has been investigating sign-up and cancellation processes for its Prime program since March 2021

Stock markets struggled for direction on Tuesday as they grappled with worries over global growth, following weak Chinese and U.S.

Losses From Crypto Hacks Surged 60% To $1.9 Billion In Jan-July -Chainalysis

Losses arising from cryptocurrency hacks jumped nearly 60% in the first seven months of the year to $1.9 billion, propelled by a surge in funds stolen from decentralized finance (DeFi) protocols, according to a blog post from blockchain analysis firm Chainalysis released on Tuesday.

China's central bank cut its interest rates on Monday for the second time this year, but analysts suspect it will do little to spur lending in an economy awash with cash but lacking in consumer demand and business confidence.

China Pares Back Holdings Of U.S. Treasuries For 7th Month

China slashed holdings of U.S. Treasuries for a seventh consecutive month in June, Treasury department data released on Monday showed, with investors closely tracking this measure in the wake of tensions between the world's two largest economies involving Taiwan.

The European Union is planning a five-fold increase in financial support to an African military mission in Mozambique, an internal EU document shows.

The European Union is working to boost its presence in the Pacific through economic ties and new security commitments as geostrategic competition in the region intensifies.

New Zealand is sending 120 military personnel to Britain to help train Ukrainians in front-line combat, the government said on Monday.

A global surge in wholesale power and gas prices means households across Europe face much higher energy bills this year and beyond, with the region's most vulnerable exposed to fuel poverty, consumer groups say.
NASA

NASA's gigantic Space Launch System moon rocket, topped with an uncrewed astronaut capsule, is set to begin an hours-long crawl to its launchpad Tuesday night ahead of the behemoth's debut test flight later this month.
Poland

The cause of death is uncertain, though officials believe the fish are likely to have been poisoned.
Bitcoin

Many people have become millionaires from investing in Bitcoin, while others have lost their money.
Climate Change

Drought: Why some UK trees are losing their leaves in August

Britain is suffering its worst drought since the 1970s, with dry weather expected until October.

Explainer - Why has Polio been found in London, New York and Jerusalem, and how dangerous is it?

Polio, a deadly disease that used to paralyze tens of thousands of children every year, is spreading in London, New York and Jerusalem for the first time in decades, spurring catch-up vaccination campaigns.

Britain has now also given the first green light to a variant-adapted shot that targets both the original and Omicron version of the virus.
United Kingdom

Drought: heavy rain now might be a serious problem for the UK's parched landscape

Coupled with dry, baked soils which are particularly vulnerable to creating fast runoff, the heavy, localised downpours that accompany thunderstorms can cause flash flooding.

UK declares drought in parts of England amid heatwave

Britain officially declared a drought in parts of England on Friday.
Climate Change

A four-day "extreme heat" warning came into force in parts of England and Wales on Thursday.
IBT VIDEO 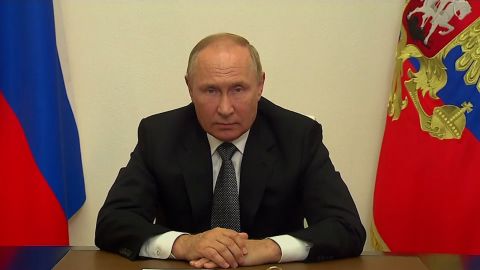 Putin Accuses U.S. Of Trying To 'Deliberately' Add Fuel To The Fire With Ukraine War

Juicy Couture and Forever 21 owner Authentic Brands (ABG) has agreed to buy Ted Baker in a deal worth roughly 211 million pounds ($254 million), ending months of speculation over the fate of the British fashion group.

Elliott Management, the hedge fund that pushed for big changes at Twitter two years ago, exited the stock during the second quarter, soon after Elon Musk announced plans to buy the social media company, a regulatory filing shows.

Luxury watch retailer Watches of Switzerland expects a potentially more challenging trading environment in the second half of its current financial year.
EMPLOYMENT
U.S., Mexico end labor probe at Stellantis Mexico plant under trade pact
Philips parts ways with CEO in midst of massive recall
Apple's $30 million settlement over employee bag checks gets court approval
Caste in California: Tech giants confront ancient Indian hierarchy
Latest News
6 Ways Iceland is innovating the tourism industry
Iceland is an amazing country that should be visited at least once in your lifetime - but you probably know that already!
National Nonprofit Day 2022: 3 UK charities to donate to
Miners toil for coal beneath the battle for east Ukraine
'I am here to kill the Queen,' Windsor Castle intruder told police
Taliban kill one of their ex-leaders from minority Hazara community
CheckOut

Investing in alternative assets could offer portfolio protection from uncertain and volatile markets.

Find the perfect Marshall headphones and earphones that suit your lifestyle.

Curve Review: Top Fintech If You Need a Budget App to Improve Cashflow

German chancellor Olaf Scholz faces lawmakers' questions this week over his role in tackling a multibillion-euro tax fraud as a sprawling probe into the scheme threatens to undermine him as he grapples with an energy crisis and the fallout of war.

Analysis-China Central Bank, Under Pressure To Ease, Is Hemmed-in By Inflation, Fed Jitters

The author Salman Rushdie was stabbed multiple times, on August 12, on stage at a literary festival in New York state.

As the new Premier League football season gets underway, a few things are certain.

Gordon Brown economics versus Liz Truss tax cuts: a new twist in the battle to resolve the UK's cost of living crisis

London 2012: what the Olympic Games' legacy of sustainability means for events today

Jihadists Spread From The Sahel To Coastal West Africa

French healthcare company Sanofi said it would stop further work on amcenestrant, once seen to have large potential against breast cancer, after a second trial failure dealt a major blow to its drug development prospects.

Apple is reportedly prepping to launch a new entry-level iPad and an iPad Pro with the M2 chip under the hood in October.

Space mission shows Earth's water may be from asteroids: study

Water may have been brought to Earth by asteroids from the outer edges of the solar system, scientists said.

What is Langya virus and what are its symptoms?

A spike in wholesale energy prices has fed into retail charges for businesses and households.