A court in Japan in its latest order has upheld the ban imposed on same-sex marriage in the country stating that the ban does not violate the constitution.

In a heart-wrenching video from the Indian state of Bihar, an elderly couple could be seen begging for money.

India's Supreme Court directed that police should neither interfere nor take criminal action against adult and consenting sex workers.

Days after protesters stormed the Cannes Film Festival's red carpet against rapes in Ukraine, another set of protesters took center-stage to hold a demonstration against femicide in France.

It seems that the Taliban will only rest after ensuring that all Afghan women have been stripped off their rights and dignity. In their latest diktat, they have asked female TV presenters to cover their faces while on air.

The first Russian soldier on trial for war crimes committed after the Russian invasion of Ukraine has pleaded guilty and now faces a possible a life imprisonment in Kyiv.

A 101-year-old former Nazi concentration camp guard may have to spend at least five years in jail for his complicity in war crimes during the Holocaust.

Afghanistan's Taliban government has now dissolved the country's human rights commission along with four other key departments deeming them "unnecessary," as the country is facing a financial crisis.

Taliban now bars men, women from eating out at restaurants together

The regressive Taliban government has now barred men and women from eating out at restaurants together in the western Afghan city of Herat. The rule even needs to be followed by married couple. 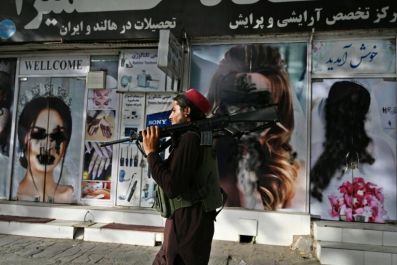