Massive stone jars that may have been used for ancient human burial practices thousands of years ago have been discovered in the Indian state of Assam.

The rate of deaths by suicide during the fifth Covid wave in Hong Kong reached a crisis level, according to a new study carried out by researchers at the University of Hong Kon

Mobile phone use does not increase risk of brain tumours: study

A large-scale study by scientists in the UK found that there was no increased risk of brain tumours in mobile phone users when compared to those who did not use one.

The UK hospitals have issued warnings asking people to be cautious as the cases of Norovirus infection have been increasing slowly when the country is already struggling to cope with Covid-19.

Ukrainian officials have claimed that more than 10,000 hectares of forest in the Chernobyl exclusion zone have been set ablaze due to active fighting between Russia and Ukraine.

China has had to shut down the Disney resort located in its financial hub of Shanghai as the country faces its worst Covid-19 outbreak in the last two years. 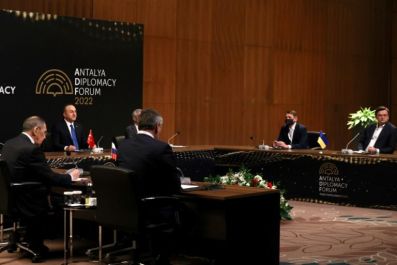 The trade sanctions imposed by western nations along with the European Union on Russia for its invasion of Ukraine have meant that one of the biggest oil and gas exporters is now left with additional stocks of the two resources with nowhere to send them to.
Delta-Omicron coronavirus hybrid variant confirmed in France
Anthropologist discovers city older than Egyptian Pyramids in old satellite images
First man to receive genetically modified pig heart transplant dies
Underwater noise pollution causes temporary hearing loss in turtles
Two 'obese' pandas put on weight-loss diet in Taipei zoo
MRI scans reveal how Covid-19 infection changes the brain
Woman wins £50,000 for research into early detection of ovarian cancer
Scientists discover a likely case of Covid-19 jumping from deer to human
Egyptian King Tut's dagger may have come from outer space, claim archaeologists
Latest News
Marine pollution: Octopuses have learned to use garbage to make shelters
Opposites may not always attract in love and sex according to study
Pet hamsters could pass Covid to humans, study suggests
Sydney Harbour turns muddy brown as Australia sees torrential rains and flooding
Editor's pick