Lesbos, a quiet Greek island in the Aegean, has long been sought after by tourists for its sunshine, idyllic beaches and rolling hills. But in the last few years, the island has become the epicentre of Greece's refugee crisis.

Located around five miles from the Turkish coast, thousands of refugees and migrants land on its shores every year after crossing the narrow but perilous Mytilini Strait in rubber dinghies and wooden boats. For many, it is the final leg of the long and arduous journey before seeking asylum in Europe.

A short walk from the picturesque harbour of Mytilene, the island's capital, an abandoned swimming pool is home to around 25 migrants. Inside, men lie in close confinement on thin mattresses in sleeping bags and blankets. Several people are sleeping behind a metal cage. Nobody stirs, even when they hear us arrive. The floor is littered with faeces left by stray dogs along with a chicken carcass and rubbish. The smell is putrid.

"I don't have the right to go to a hospital or to go to school," says Samir*, a 17-year-old migrant from Algeria who has been living in the pool for a month. "I am on my way to Europe to find a future. I want to go to France because I have family there."

Greece is experiencing its coldest winter in more than a decade. Even though the snow has melted in the January sunshine, the air is crisp and the building is extremely cold. It provides shelter from the elements, but many of the windows are smashed and there is no electricity or running water. Overnight, the temperature drops to below freezing. The men living there say they try to light small fires to keep warm, but then they risk being caught by the police.

"They catch us and beat us," Samir says. "It is damaging psychologically because every day I am afraid. I am scared. There are beatings and now I have a problem with my blood sugar," he adds. "I am afraid of being caught. I have lost hope." 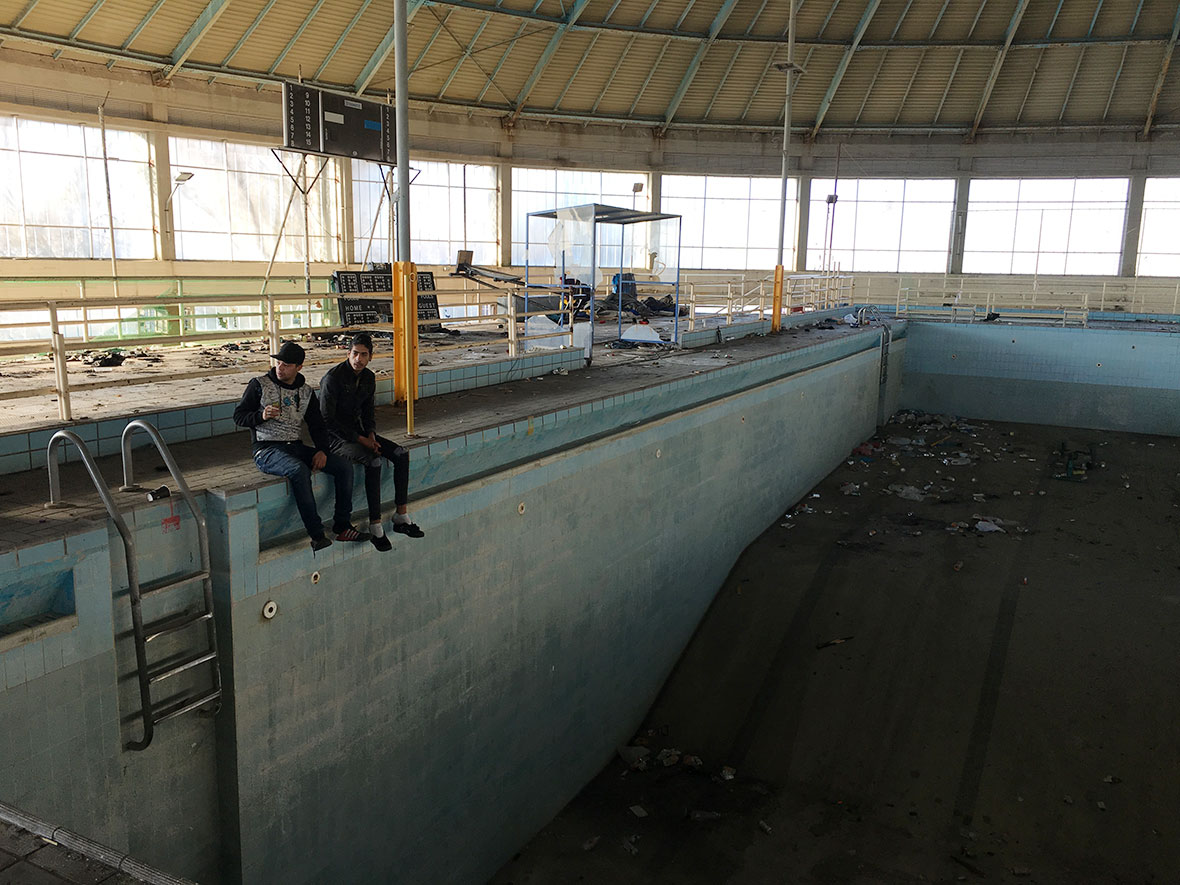 As he speaks, more men come over with similar stories. One man points to a faded bruise underneath his eye, which he says was the result of clashes with the police. He then gestures to another migrant sleeping on the floor behind a wire cage, who hasn't moved since we arrived.

"His mother died a few months ago and he's very sick," he says. "But he can't get help."

It is damaging psychologically because every day I am afraid. I am scared.

When we return to the pool the following day, it is clear the men living there aren't welcome. A padlock has appeared on the metal gates outside, so we climb over the wire fence to get in. The glass in the front doors or the building has been smashed but not boarded over, so it is fairly easy to access – the locking of the perimeter fence appears to be more of a statement than to actually keep people out. A handful of men are still asleep on the floor inside.

Propping himself up on his elbows, a 26-year-old migrant from Algeria says he has been living in the swimming pool for five months. Ahmed* says he came to Lesbos because of economic problems at home. "There are no jobs and you can't have a future there," he says. 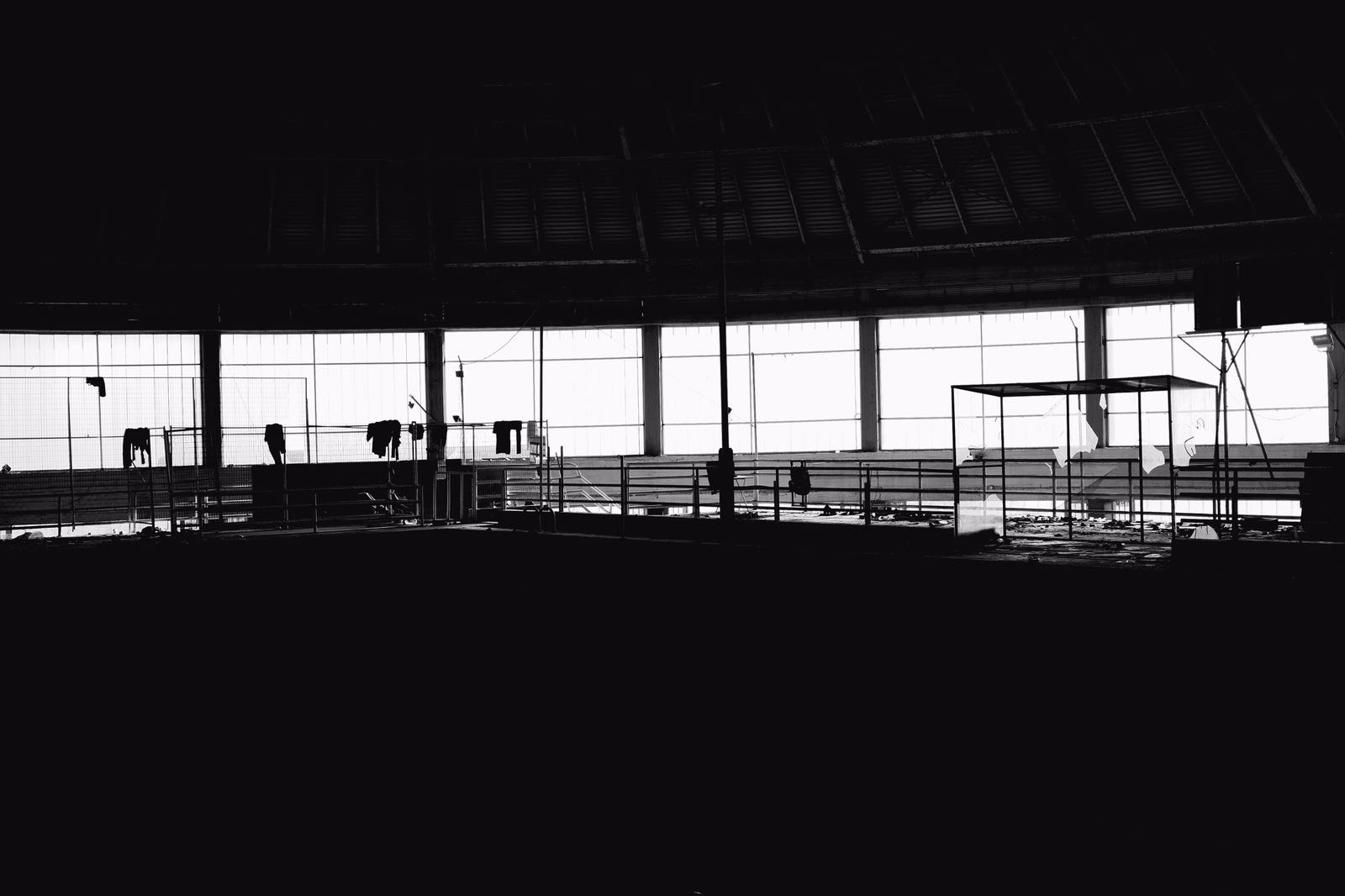 For food, Ahmed and the other men rely on handouts from locals or international NGOs, such as Muntada Aid, which delivers essential aid to refugees and migrants on Lesbos.

"A German man comes here once a day and gives me half a cup of rice. The birds are old, they are from when we had money to buy food months ago," Ahmed says, waving in the direction of a pile of feathers and bones.

I don't care about the life I have here. I have a dream to get a job.

Around three miles up the coast are the migrant camps of Moria – a former military base which is now home to around 3,000 people –  and Kara Tepe, which is smaller. Although the Greek government has created temporary housing for the thousands of people stranded by the EU-Turkey agreement, many of the camps are unsanitary and extremely cramped.

The conditions in the camp deteriorated as snow hit the island in January and temperatures plummeted. In one week, at least four men died in Moria, reportedly from inhaling fumes from a heater while trying to keep warm. Back in November, the residents of Moria tried to burn down the camp after a woman and her six-year-old child died following a gas cylinder explosion. 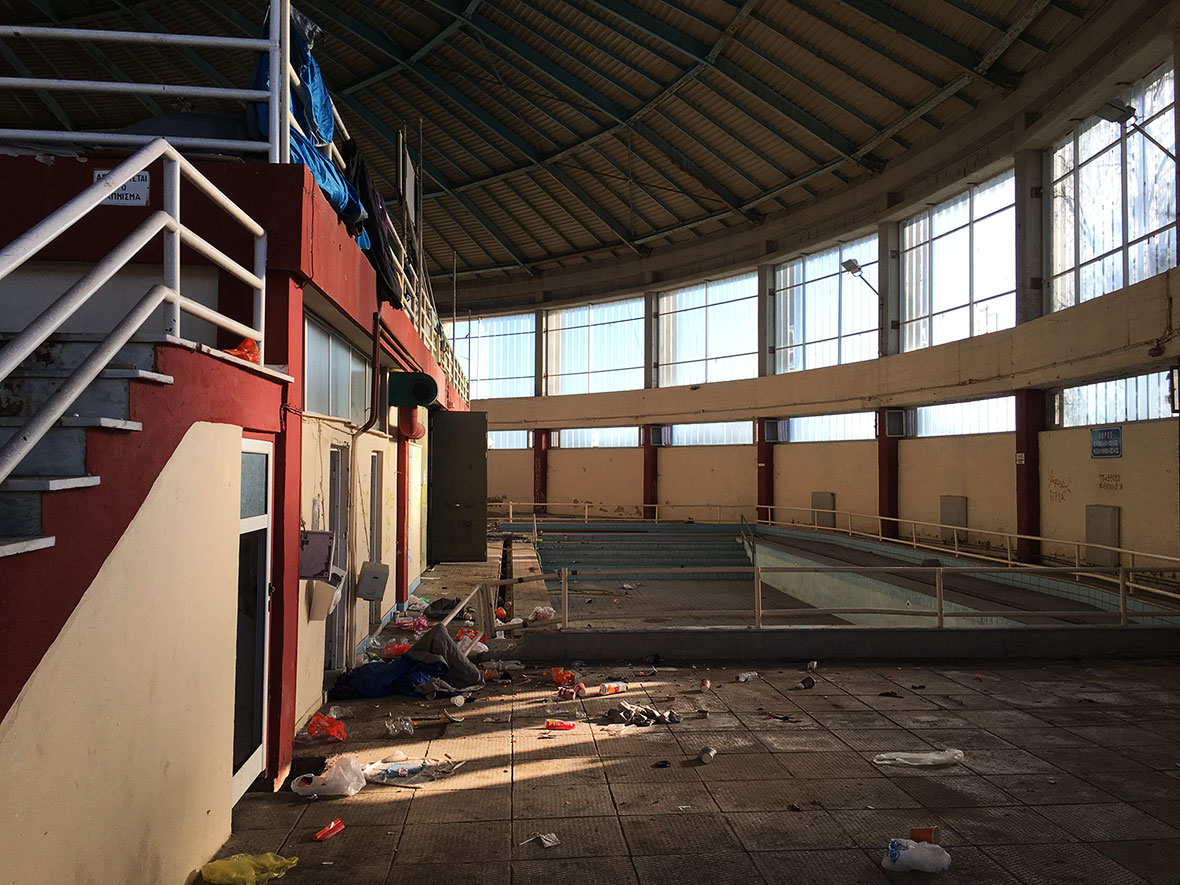 Back in November, the residents of Moria tried to burn down the camp after a woman and her six-year-old child died following a gas cylinder explosion.

Refugees tell stories of the dire conditions inside the camp, including a lack of clean running water and violence. "Once a month I go to the camp to take a shower but I don't like it. It's not clean over there," Ahmed says. "I don't live in Moria because I don't feel safe there."

Through a broken window behind the main diving pool, the glittering stretch of Aegean sea separating Greece and Turkey is visible. Ahmed says that in the warmer months, they swim and wash their clothes in the sea, but it is far too cold in the winter.

Yet despite the conditions inside the building, Ahmed says he has no plans to return to Algeria – and hopes to settle and find a job in Europe. "I don't care about the life I have here. I have a dream to get a job and live a better life," he says.

*Names have been changed to protect identities.