The Battle for Marawi

Philippines President Rodrigo Duterte, who has expended huge amounts of political and military capital on his war on drugs, has been forced to change tack and tackle Isis-affiliated Muslim extremists in their own 'back yard' of Mindanao.

Located on the island of Mindanao, two hours by plane from the Philippines' capital Manila, lies the city of Marawi, home to one of the biggest Muslim communities in the country. The autonomous region has long been the scene of violent and frequent battles for independence.

In the early 1970s, several criminal groups gained power and influence in local politics. They began to demand more power over legislation in the region. The conflict eventually deteriorated into a war between government forces and the Moro National Liberation Front, an Islamic separatist organisation that demanded full independence for Mindanao from Manila. "Moro" is a local term to identify various Muslim groups living in the southern Philippines. Today, the Moro minority makes up a little more than five percent of the total population.

While the government never accepted the independence aspirations of local religious and military leaders, they did allow the region to become autonomous as of 1 August 1989. Today, the Autonomous Region in Muslim Mindanao (ARMM) is the only one in the country with its own local government that controls spending on education and health. However, its powers stop short of controlling taxation.

The Islamist groups in the region – created from the remains of the now defunct Moro Liberation Front – have spent the last 40 years fighting both the Philippines government and each other for control of Mindanao. This war has already claimed more than 150,000 lives. Isis is now also operating in the region, attempting to establish an independent Islamic state in South-East Asia.

Mindanao: an island on the brink

As the siege of Marawi enters its fourth week, fighting between national security forces and rebels continues, both in central neighbourhoods and the outskirts of Lanao del Sur province.

Officials say that around 290 people have been killed as of 14 June, but reports from the region suggest the figure could be higher. A coalition of Islamist groups operates inside the city, with others trying to expand their control in nearby provinces. 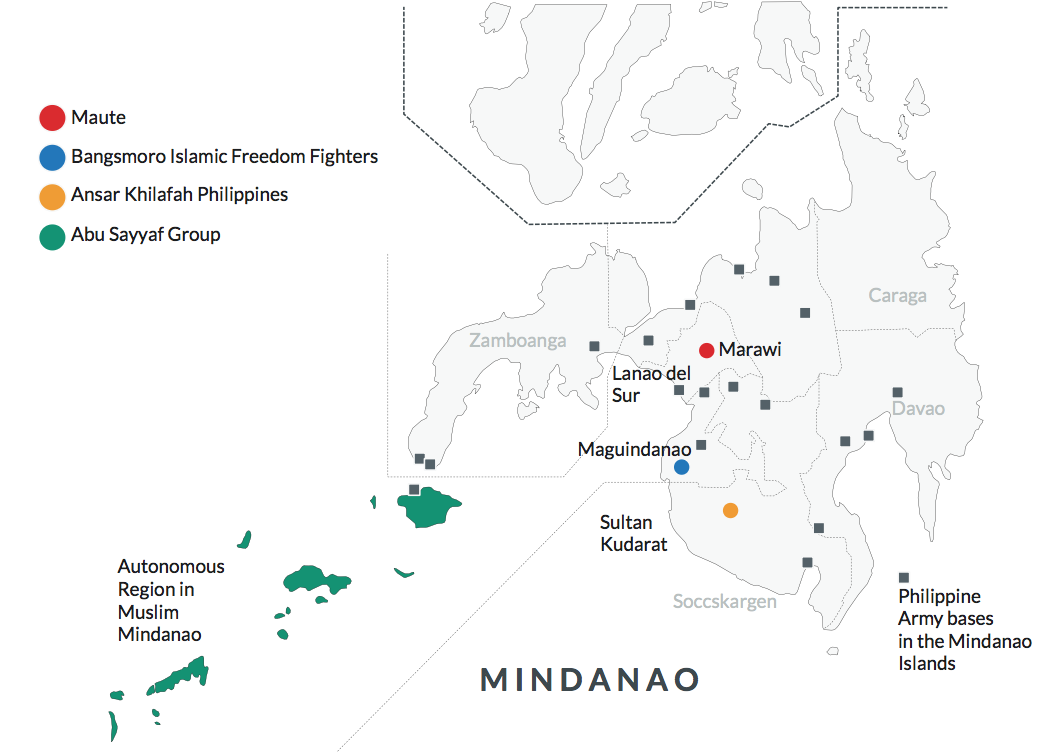 Islamist groups such as Maute, Bangsmoro, Ansar Khilafa and Abu Sayyaf have been able to consolidate their positions on the island, as President Rodrigo Duterte has focused much of his military and police power on his war on drugs. Free from close monitoring, the groups have been free to create strong bonds with Isis.

With foreign fighters – from Indonesia, Malaysia, Saudi Arabia, Yemen and even Chechnya – arriving on the island, President Duterte faces a situation that could plunge the entire region into crisis.

In 2016, Duterte rejected a ceasefire deal offered by Maute, who are now leading the fight in Marawi. Local press reported at the time that Duterte had challenged the group, which had first threatened to attack the city as far back as December 2016.

The battle now raging in Mindanao began following a failed attempt by security forces to capture Isnilon Hapilon - Abu Sayyaf Group (ASG) leader and a close ally of both Isis and Maute – in May 2017. Hapilon is one of the world's most-wanted terrorists, with a $5 million bounty on his head from the FBI. Under Hapilon's guidance, the ASG has become more powerful. According to a report published by the Philippine authorities in October 2016, the group's bank accounts have received deposits totaling £5.7m during the first six months of 2016 following a series of kidnappings and extortions. These include the abductions of two Canadian tourists who were beheaded by the group in February.

Duterte has refused to negotiate with militant groups, and has threatened to declare martial law across the entire country. Martial law has been in effect in Mindanao since 23 May 2017. 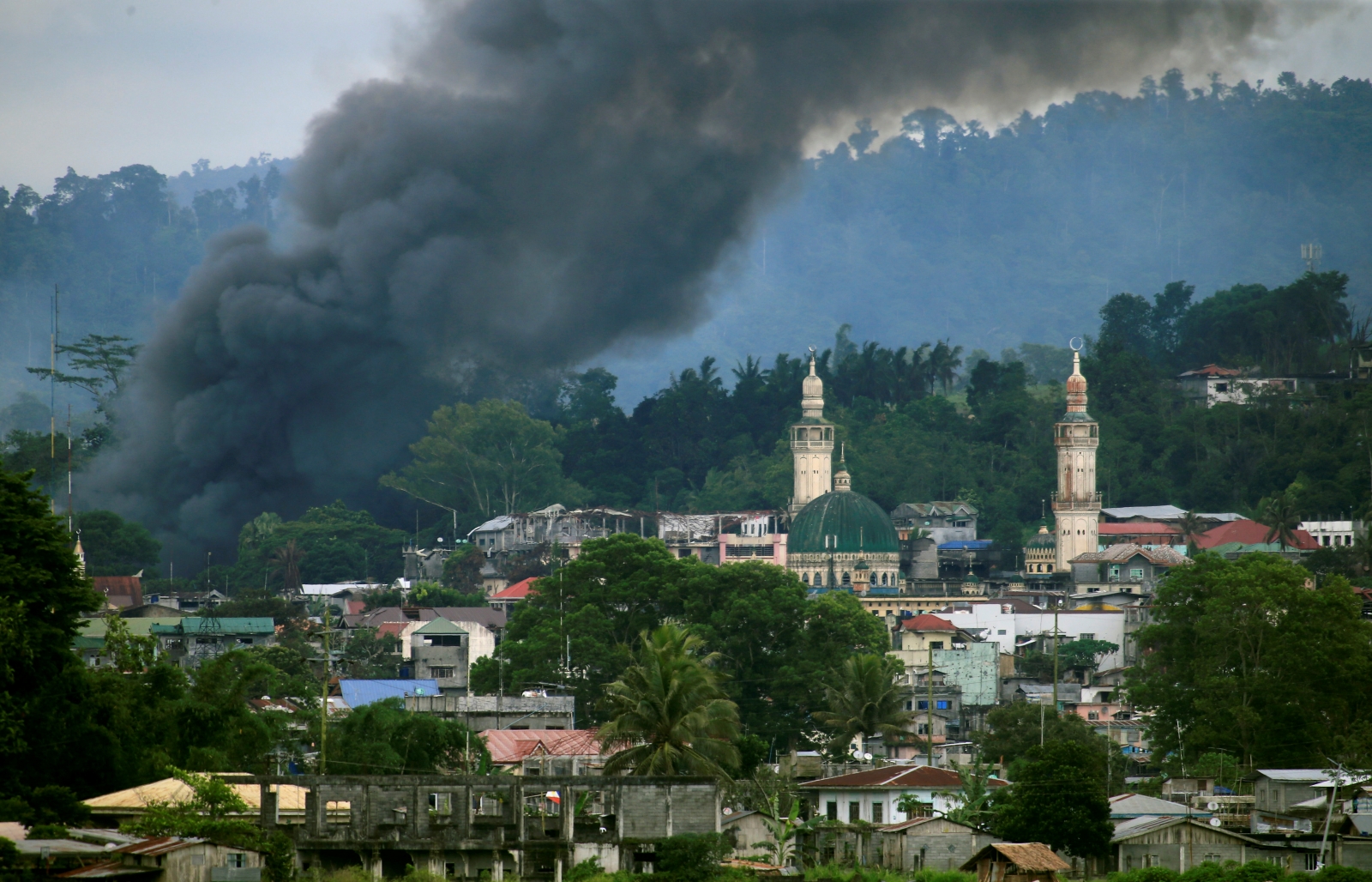 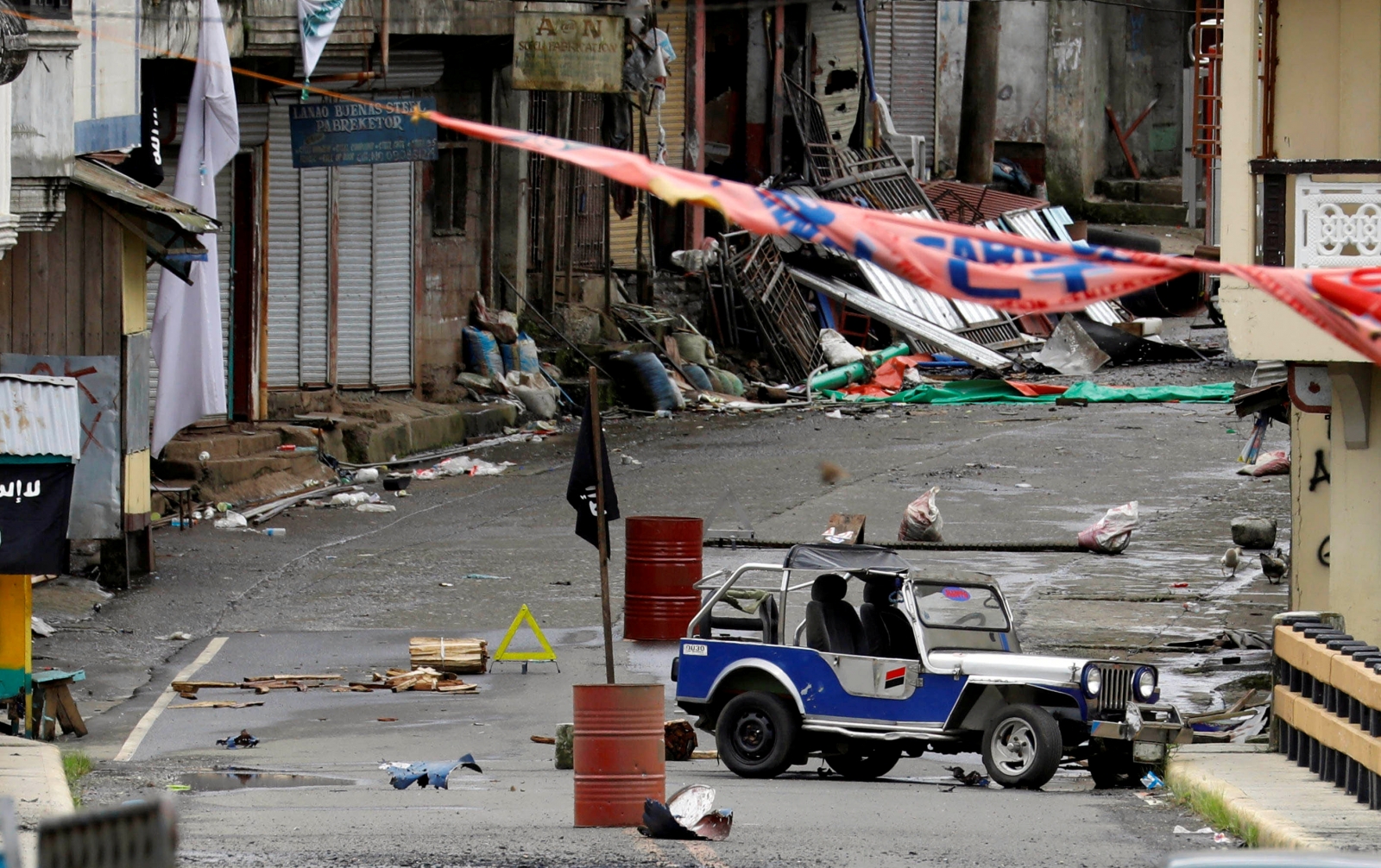 On 14 June, the Philippine Army confirmed the presence of American troops around Marawi. They were said to be offering strategic support but not engaging in direct combat. The military has intensified its daily bombing runs, with the logistical help from US special forces based in the nearby city of Zamboanga.

The targeted areas are densely populated, with more than 2,000 civilians believed to remain there.

As the bombings continue, more than 200,000 civilians have been displaced. The urban street fight between Maute and Filipino forces is also ongoing.

After setting fire to the southern part of the city and freeing prisoners from its jail in the first weeks of the attack, rebels have now moved into the central part of Marawi, where they are trying to gain control of three bridges linking the northern suburbs. Heavy fighting has been reported around city hall, the Amai Pakpak Medical Centre and Campo Ranao military base.

The Philippine Army claims rebels control 20 percent of the city. The militants are mainly based at mosques and madrasas, which compounds the difficulty of the military operation because the buildings are protected cultural sites.

A history of violence

Islamist rebels responsible for the attack on Marawi came from two factions: the Maute and the Abu Sayyaf group (ASG).

ASG leader Hapilon is the Isis emir in South-East Asia and pledged allegiance to the group in a YouTube video in 2014. The group's most significant terror attack was the bombing of a passenger ferry in 2004, which killed 114 people.

The ASG was formed in 1991 by Abdurajik Abubakar Janjalani, a former Moro National Liberation Front member disillusioned when the group settled for autonomy rather than fighting for independence. He was said to have met Osama Bin Laden in Pakistan and the pair later fought together against the Russians in Afghanistan.

The attacks on Marawi mark the first time that groups created after Mindanao was granted autonomy have joined forces in an uprising against the national government. Since the start of the fighting, Isis released propaganda videos promoting victories over the army. One of the videos, allegedly filmed in Marawi, shows a public execution.

On 12 June, Filipino military spokesman Brig. Gen. Restituto Padilla Jr. spoke to local media, suggesting that Hapilon was in hiding in a militant stronghold inside the city and leading the battle.

Despite the optimism of the Philippine Army, the fighting is ongoing and more local clans and foreign fighters are reported to have joined insurgencies in the nearby provinces of Maguindanao and Sultan Kudarat. 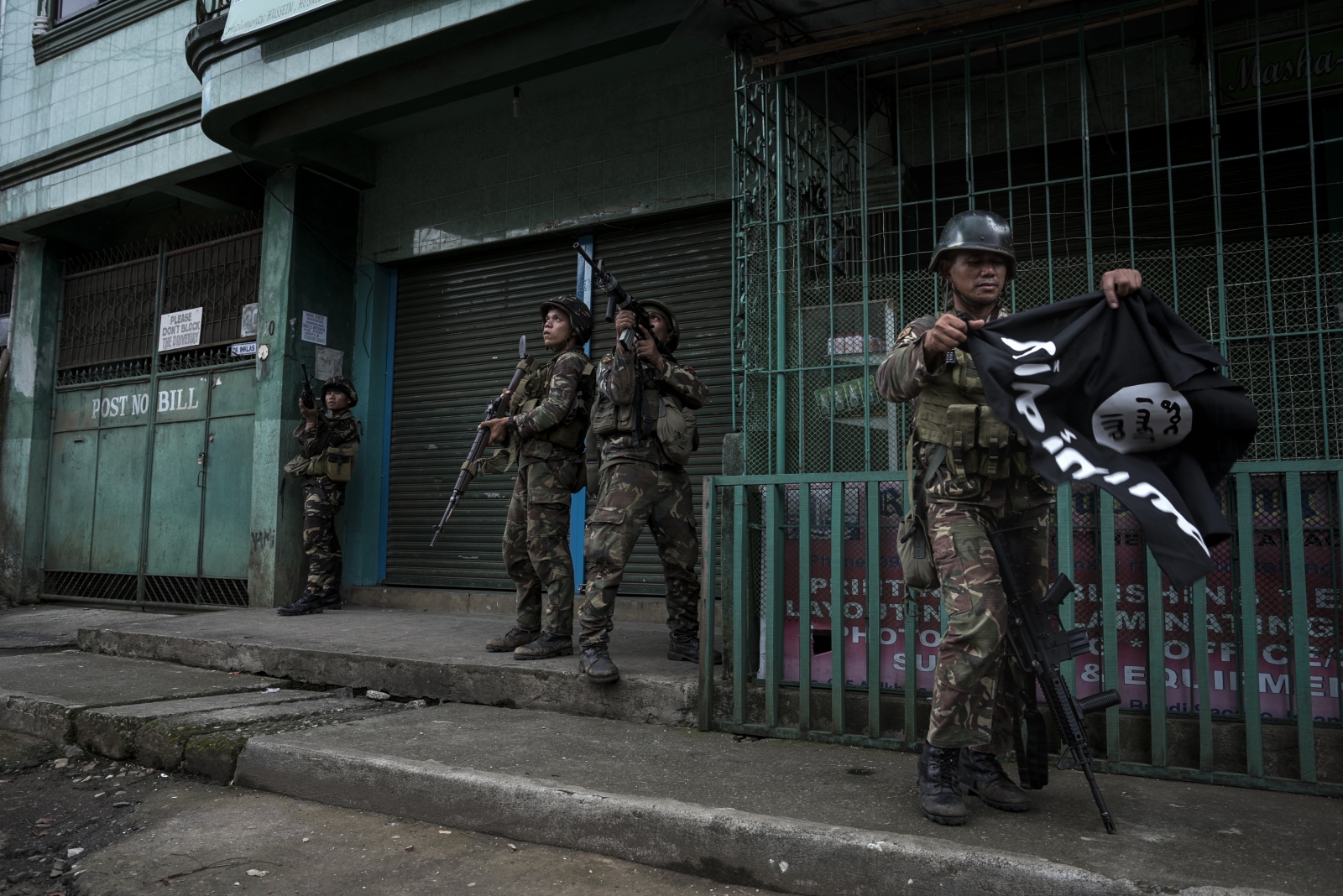