A new report claims that the US is wasting billions of dollars upgrading nuclear bombs based in Europe that are no longer an effective deterrent and could be a security liability.

The number of air strikes conducted by international and Afghan air forces "increased significantly" in 2017, the UN says, killing 295 civilians and injuring 336.

Over Syrian 1,000 civilians, many of them children, were killed in the first week of February alone as air strikes hit hospitals, schools and markets.

A report by the US intelligence agencies has warned that China and Russia are developing space weapons to be used against satellites in future conflicts.

The Su-35 is one of Russia's most dangerous fighters and is waiting for a major upgrade soon.

US strike killed at least 100 Russian mercenaries during Syria attack

The US killed at least 100 Russian mercenaries during a failed attack on a US-held base in the oil-rich Deir Ezzor region of Syria.

The French government has announced it will introduce a "Universal National Service" for young citizens, as President Emmanuel Macron delivers on one of his campaign pledges.

The footage was shared on social media and shows the boy lying on the ground, asking the rebels if they plan to shoot him.

Isis Beatles: US and UK in row over fate of captured murderous British terrorists

The US and the UK are fighting over what to do with the so-called Isis Beatles, Alexanda Kotey and El Shafee Elsheikh who were captured in Syria.

Israeli Prime Minister Benjamin Netanyahu has promised to continue strikes in Syria despite the risk of sparking a conflict with Iran via its Syrian and Lebanese proxies. 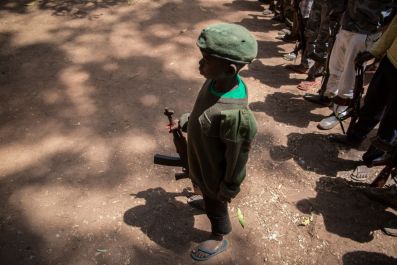