Airlines Confident Of Narrowing Losses, Lash Out At Governments

Global airlines battered by COVID-19 seem confident of narrowing their losses and went on the offensive at an industry summit in Qatar, criticising governments and airports over their handling of the recovery from the pandemic.

Low-cost airline easyJet said on Monday it was cutting thousands more flights this summer after London Gatwick and Amsterdam airports reduced capacity and it battled staff shortages on the ground and in the air.

Airbus CEO says in discussion with Qatar on A350 dispute

Airbus is in discussions with Qatar Airways to try to resolve a bitter legal and safety dispute over the A350 passenger jet, the planemaker's chief executive said on Sunday.

Britain's company directors should sign up to a code of conduct to improve behaviour in boardrooms after high-profile corporate collapses, such as builder Carillion and retailer BHS, an industry body proposed on Sunday.

British finance minister Rishi Sunak has toughened his language towards Bank of England Governor Andrew Bailey, a reflection of the political pressure piling on them both as inflation surges towards double digits.

Barclays Head of Macro Trading for EMEA and Asia Pacific, Nat Tyce, is leaving after more than 25 years, a staff memo seen by Reuters shows, after transforming the trading unit into one of the bank's highest-flying divisions.

Central banks across Europe raised interest rates on Thursday, some by amounts that shocked markets, and hinted at even higher borrowing costs to come to tame soaring inflation that is eroding savings and squeezing corporate profits.

Supply chains remain stretched. The legacy impact of the pandemic, the recent lockdowns in mainland China constraining port activity, the ramifications of the Russian invasion of Ukraine and global container shortages are all affecting the ability of the world's producers to ship products from point A to point B. 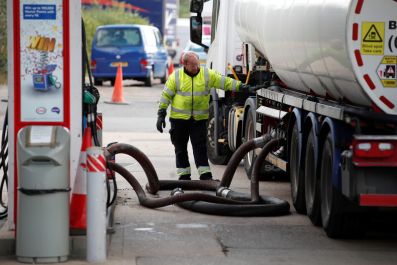