UK Jobs Market Loses Some Of Its Inflation Heat

Britain's jobless rate rose for the first time since late 2020 and other measures of the country's hot labour market cooled, potentially easing inflation worries at the Bank of England which is due to raise rates again this week.

Two influential proxy advisers have both recommended voting for the appointment of all Toshiba Corp director nominees including two from activist shareholders, despite objection to the move from within the board.

The Pandemic Broke The Fed's Model; This Week May Show How Much

Many in attendance spoke of a massive surge in demand as countries ramp up production, both to send munitions to Ukraine and to beef up their own arsenals.

The strike would come as summer holidays get underway in European countries and a recovery in air travel following the lifting of most Covid-19 travel restrictions.

The trillion-dollar retail investment express is losing steam, dampening the fortunes of British trading platforms that boomed during lockdowns on the back of a meme stocks frenzy.

Leading UK and U.S. pension investors managing more than $1 trillion have launched a campaign to stop companies using dual-class share structures that concentrate voting power in the hands of certain shareholders at the expense of others.

Britain's economy unexpectedly shrank in April, official figures showed on Monday, adding to fears of a sharp slowdown just three days before the Bank of England announces the scale of its latest interest rate response to the surge in inflation.

Global Advertising To Grow By 8.4% This Year -report

The global advertising industry is expected to grow 8.4% this year, despite ongoing geopolitical situations around the world and fears of a recession, a report on the sector said on Monday.

Quebec's plans to attract more French-speaking newcomers are unnerving some business owners who say they need immigrants from varied backgrounds to address a tight labor market in the Canadian province. 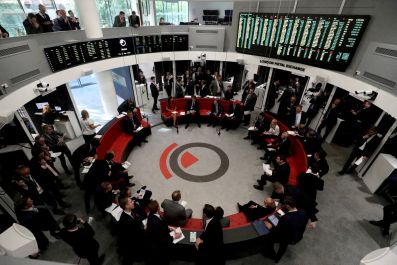 Britannia Global Markets To Give Up LME Membership On June 20