Multiple reports from US media have said that during a meeting on immigration President Donald Trump asked why immigrants from "sh*thole" African nations came to the US.

Number of applications soars to more than 3,000 as Britons grab chance to stay in Europe and avoid post-Brexit uncertainty.

They face dangers ranging from losing their footing on steep drops, being struck by falling rocks or succumbing to temperatures as low as minus 9C (15°F)

38 migrants who landed in Italy have said they underwent degrading and unlawful treatment at the hands of Italian authorities after they refused to give their fingerprints.

High fertility rates and increasing migration mean that Muslims will become second biggest religious group in US, according to Pew Research,

Will hundreds of thousands of Rohingya Muslim refugees ever go back home to Myanmar?

Myanmar pledged that Rohingya Muslims who fled to Bangladesh by the hundreds of thousands would start their journey home later this month. However, few believe that will happen. 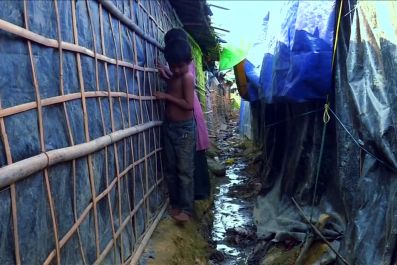 Aisha, a 20-year-old mother, wants to educate her daughter but added that she "does not even know what will happen in the future".
Ai Weiwei's extraordinary film about refugees is a call to action we cannot ignore
Denmark could send failed asylum seekers to live on desert islands
Trump travel ban allowed to go ahead by US Supreme Court
Pilots across Germany are blocking the deportation of asylum seekers
Can a curb on immigration stop the rise in Europe's Muslim population? Not likely, says new report
The 100 most powerful images of the Rohingya Muslim refugee crisis
Papua New Guinea police storm Manus Island detention centre and order asylum seekers to leave
Huddled masses: Haunting Rohingya refugee photos the world cannot ignore
Poignant portraits of Rohingya Muslim refugees injured while fleeing ethnic violence in Myanmar
Latest News
Saudi police shot and stole from Ethiopians during mass deportation claim abused migrants
Twelve of 2017's most powerful images and the moving stories behind them
Sudanese refugees 'tortured' after Belgium repatriates them
Scotland has housed 2,000 Syrian refugees - three years ahead of schedule
Editor's pick