The Duchess of Sussex announced the release of her first Spotify podcast series in the summer.

The Duke of York surprised viewers when he walked Her Majesty to her seat during the service.

The image of Prince Andrew escorting the Queen is what people are talking about and not the Duke of Edinburgh.

The Prince of Wales told Her Majesty that he disapproves of the Duke of York being at Prince Philip's memorial.

Prince William and Kate Middleton were welcomed by protestors calling for reparations from slavery during their tour of Belize and Jamaica.

The Duchess of Cambridge surprised viewers when she curtsied at the Queen while others did not.

The Duke of Sussex founded the international multi-sport event for wounded veterans and armed services in 2014.

The Duchess of Sussex paid tribute to Oli Juste who introduced her to the animal welfare organisation Mayhew.

Martin Bashir provided fake documents and told lies in order to convince the late royal to do the interview.

The Duke of Cambridge has only personally seen his brother twice since Megxit in January 2020.

Prince Harry feels 'some regret' over rift with royals

The Duke of Sussex has only gone back home to the U.K. twice since he left his royal duties in January 2020. 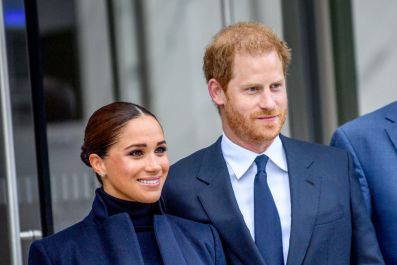 Meghan Markle blasted for insulting royals who gave her 'notoriety'