Chuseok, Korea's harvest festival, is taking place - and millions of people are leaving the cities to visit their ancestral homes. But for North Korean refugees this is impossible.

Committee said the International Campaign to Abolish Nuclear Weapons won the award for its "groundbreaking efforts to achieve a treaty prohibition."

With Hawija liberated, Iraq is just about free of Isis. Now the region must face the Kurdish issue

Iraqi troops and Shia militia have recaptured Hawija, the last Isis stronghold in northern Iraq. Now comes another crisis for Iraq and its neighbours: Kurdish independence.

As war rages on, Syria's football team is close to qualifying for the World Cup

The team's success has left many Syrians feeling conflicted due to its strong ties with President Assad.

Isis once controlled larges swathes of Iraq and Syria, but the group has lost several areas to joint offensives launched by coalition forces in both countries.

Iraqi forces and Shia paramilitaries have entered the town of Hawija, one of just two pockets of territory still under control of Islamic State (Isis/Daesh) in Iraq.

The insurgency has affected the north-east Borno state most acutely, with 2,300 teachers killed and nearly 1,400 schools destroyed since 2009.

Battle for Raqqa photos: Isis confined to hospital and stadium, with hostages and snipers in both

Photos of the battle for Raqqa, where the jihadists' last strongholds are a hospital and stadium, with hostages in both.

17 people were killed over the weekend in protests in support of independence for some Anglophone regions.

Anti-terrorism experts argue such claims are not reliable and are a propaganda tool.

Hamza bin Laden has repeatedly called on followers to attack the West. 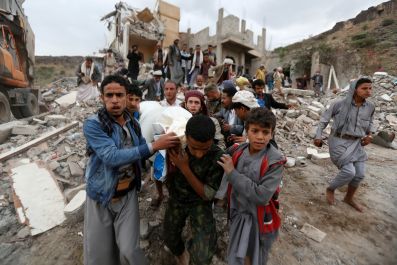 Revelation comes ahead of UN resolution calling for a commission investigating war crimes in Yemen.
British filmmaker Mehmet Aksoy 'is killed during Isis attack in Syria'
Iran mourns 'dear martyr' Mohsen Hojaji who was beheaded by Isis in Syria
Photos of 'final stages' in battle for Raqqa as noose tightens on Isis
Video shows huge blasts as Ukraine ammunition dump catches fire in suspected sabotage
Iraqi Kurds told to give up on independence or face war, hunger and air embargo
Another Rwanda: Nearly half a million Rohingya Muslims have fled Myanmar in four weeks
Abu Walaa: The 'faceless preacher' of Isis goes on trial in Germany
Manchester jihadist Raymond Matimba's role revealed in video with key Isis members including Jihadi John
Latest News
Two women knifed to death in Marseille by man Isis claims was one of 'its soldiers'
Iraqi military preparing to take control of Kurdish borders
Isis leader al-Baghdadi 'back from the dead' in 'recording' calling for attacks on the west
'Suicide by Israeli' increasingly seen as a way out for troubled Palestinians
'Slim Jong-un': Picture of skinny Kim Jong-un makes North Korea's leader look even more terrifying
First look at burnt Rohingya Muslim villages in Rakhine state, Myanmar
Editor's pick